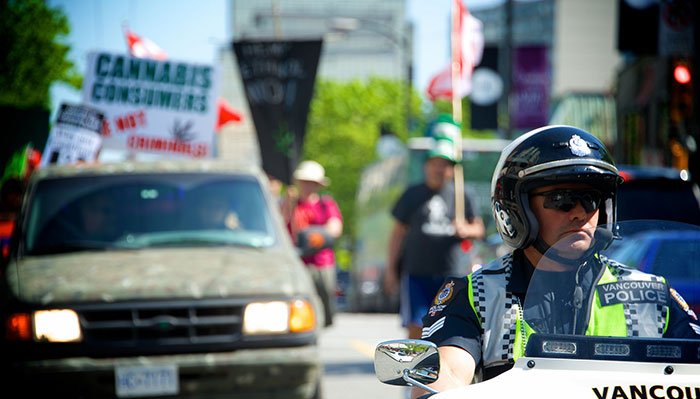 Victoria’s top policeman says the legalisation of cannabis won’t change the approach of police when it comes roadside drug testing and drug policy.

Before we get you confused and wonder when Victoria relaxed the laws on cannabis, the Victoria in question is the capital city of British Columbia, Canada. The province legalised the use of cannabis recently, but the capital city’s Police Chief says this won’t change their aim to take impaired drivers off the road.

Del Manak said officers trained in administering roadside sobriety testing will be deployed in coming weeks at roadblocks aimed at busting high drivers. The department will also launch an education campaign called “Wait Until You Get Home,” urging cannabis users to avoid getting high before they drive or while they’re driving.

Police officers in Victoria and other parts of the province are also being warned to be careful. They will be permitted to use cannabis off-duty, so long as they don’t consume the drug within 24 hours of reporting for duty. If any employee is on call, they will be prohibited from using cannabis.

“The objective is to ensure that employees are coming to work fit for duty while respecting their individual rights under the new federal legislation,” said Mr Manak, adding that existing policies will likely develop further over time.”

While Victoria, Canada, may be a world away from Victoria, Australia, it will be interesting to keep any eye on developments in Canada as there is regular debate here about the legalisation of cannabis. However, like in Canada, no matter what happens we don’t believe the debate, or the potential legalisation of the drug, having any impact on drug testing.

The reason that drug testing is carried out on our roads and in our workplaces is not to identify who takes drugs and who doesn’t, it’s to remove impaired people so that they and others around them are safe. It’s about fit for duty, in the case of workplace drug testing, and fit for driving, in the case of roadside drug testing. Whether cannabis is legal or not won’t change this.