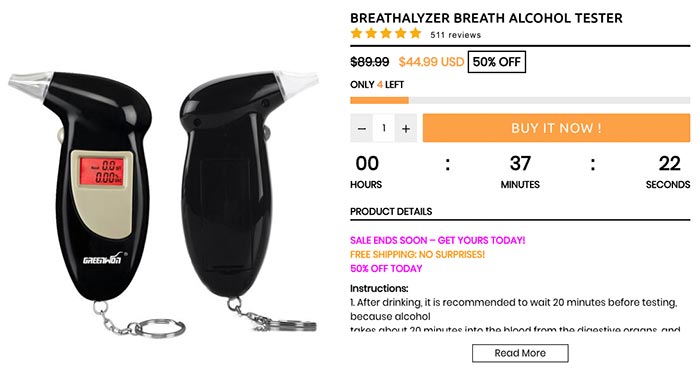 We all get a lot of spam with our email these days and one that has become a regular to my junk folder has been one on police grade breathalysers. While I know the email could be misleading at best, it made me wonder how many people might actually click on the links in emails like these thinking, “Yes, I’d like to carry around a breathalyser in my pocket so I know when I shouldn’t drive my car”.

So, let’s take a look at whether it’s a good idea or not.

Firstly, taking a closer look at that email in my junk folder raises some interesting questions. The promoters of the breathalyser in question make a good case of selling the idea that a personal breathalyser is a good thing.

The email reads, in part, “The issue of Teens driving under the influence kills some 5,000 youth under the age of twenty-one in Australia each year. However 2018 marks a year of hope as tens of thousands of Australian Parents are fighting back and using the power of technology to save lives.”

Wow, compelling stuff. Unfortunately for the promoters and thankfully for “Australian Parents” and Australia in general, it’s not true.

A quick look at road statistics shows that around 1200 people die on Australian roads each year. That’s 1200 in total; not 1200 people under the age of 21. So, what have the promoters done? A click through to the website reveals that the breathalyser is sold in US, where the number of fatalities per year is around the mid 30,000s. So, if you’re thinking what I’m thinking, it’s pretty easy to see that the promotors of the breathalyser are lazy at best, shonky at worst.

“Don’t miss the opportunity to snag yours before they’re all gone,” says the last line of the email. If you weren’t convinced that this deal is too good to be true, surely this last line would have you wondering!

Is it possible to buy a personal breathalyser that is accurate?

As we’ve looked at before in our blog (see Are breathalysers accurate?), there are two main types of breathalysers on the market, cheaper types called semiconductor breathalysers and more expensive items called fuel cell breathalysers. The former can be far from accurate, particularly over time, while the later, the type used by police forces and drug testing firms, are more accurate. But they aren’t 100% accurate and must be calibrated regularly by a professional to maintain a high level of accuracy. That’s why they are only used to provide an indication that further testing is required.

So, the gist of all this is if you want to have a personal breathalyser, spend a little bit more on a good quality one and only use it as a guide. And if you get an email like the one described above, delete it straight away!