The government says the new buses – which should all be rolled out by the end of this year or early next – will give police the edge in the war against drivers who drink or take drugs and then drive. It’s expected the new buses will give police even greater flexibility to target more locations, more often, to keep our roads safe.

With the help of the new drug and alcohol testing buses and other strategies, it’s anticipated that Victoria Police will be able to conduct around 100,000 drug tests a year on our roads.

“Sadly last year of the 166 drivers or riders who lost their lives on the road, 56 were either over the alcohol limit, had drugs in their system or both,” AC Fryer said.

“Twenty one were over the limit, 27 were found to have drugs in their system and a further 8 drivers/riders were both over the limit and impaired by drugs. These are sobering figures as we highlight our new fleet. To think 34 per cent of people who lost their lives on the road, and who were in charge of their vehicles, actually chose to get behind the wheel impaired is shocking.

For those used to seeing the old Victorian drug and alcohol testing buses, the new design will certainly be something different. Assistant Commissioner Doug Fryer said, “The design of the buses follows the tradition of innovation that has been the hallmark of the Victoria Police mobile alcohol and drug testing campaigns.

“The new buses have been designed with enhanced safety measures to keep our members safe and include LED flood lighting technology, one step entry with an internal flat floor, front and rear storage areas for equipment and state of the art electronic control systems. This will allow for easier set up and pack up meaning the buses can be moved more easily to cover more areas for drug and alcohol testing.

“The investment by Victoria Police, government and the Transport Accident Commission in committing to the fleet of new buses sends a strong message of our very real commitment to remove impaired drivers from the road.” 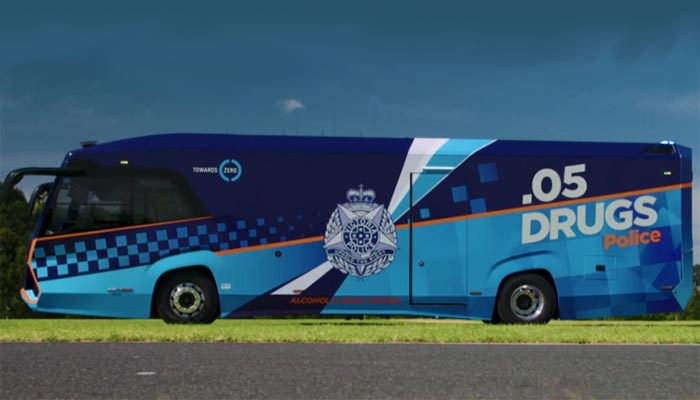