When people consider the impacts of drugs and alcohol in the workplace they often presume it’s something that only affects so-called blue collar workers, but testing by Integrity Sampling shows that management, administration and supervisory staff are not immune from the temptation of alcohol and drugs.

While the number of positive tests involving white collar workers are a concern, given the nature of their work the greatest concern must be those workers who use machinery while under the influence of drugs and alcohol. These people are predominantly represented in the fork lift operators and drivers categories. Just as alarming is the percentage of positive tests recorded by storepersons, who also use machinery and work in an environment where they need to be focused to ensure the safety of themselves and others.

Clearly, workforces still have a lot of work to do to educate and manage their workforce in the dangers of coming to work under the influence of drugs and alcohol. 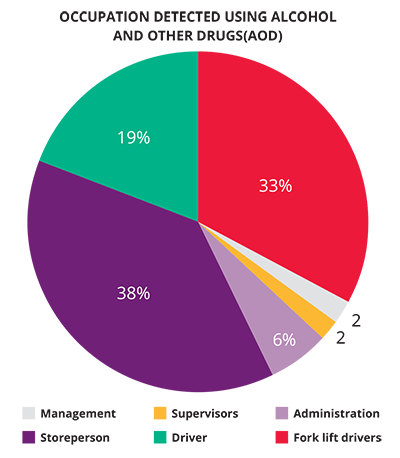