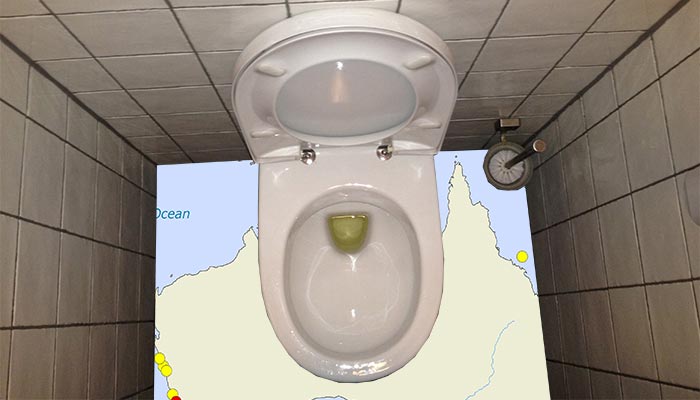 It doesn’t matter whether you’re in Brisbane, on the Gold Coast, in Cairns or potentially any other part of Queensland, when you go to the toilet you could be taking part in drug testing and helping our knowledge of drug issues across Australia.

Down the loo for drug testing

The toilet testing is all part of the National Wastewater Drug Monitoring Program, run by the Australian Criminal Intelligence Commission. The program involves drug testing the wastewater at treatment plants across Australia to see what drugs (legal and illegal) Australians are using and in what overall quantity.

For the Queensland wastewater drug testing, ten wastewater sites were monitored for the latest report, which was released last week. Three sites were capital city sites (in other words Brisbane) and seven were regional.

For the latest reporting period, it was found that Queensland had the equal highest average regional consumption and second highest capital city consumption of fentanyl nationally. Just in case you don’t know, fentanyl is an opioid prescription drug that is used for severe pain and is about 80 to 100 times stronger than morphine. Its strength is one of the reasons why it’s a drug of concern, with incorrect use of the drug and use without prescription causing a high number of overdoses in Australia and indeed worldwide.

Australian Criminal Intelligence Commission Chief Executive Officer, Mr Michael Phelan said that much of the harm that Australians suffer at the hands of organised crime is due to the illicit drug trade. By measuring the level of consumption of illicit drugs and legal drugs with abuse potential, the National Wastewater Drug Monitoring Program provides a key indicator of the level of harm posed by these substances.

We’ve got nearly 20-years’ experience in drug and alcohol management and can help you with all your needs, including development of policies and procedures, education, alcohol testing and drug testing. Plus, we have branches all over Queensland, including in Cairns and in Brisbane. In addition, we have a technician based on the Gold Coast who can provide workplace drug testing and any of our other services.

What does your toilet have to do with drug testing on the Gold Coast, drug testing in Cairns or drug testing anywhere else in Queensland? Credit dirtyboxface (image modified) https://bit.ly/2CmzxGx