While we’re in the middle of one of the biggest periods on Tasmania’s roads for policing, one thing that is sure is that police still have drink drivers firmly in their sights. And while alcohol testing will be a key component of the Tasmanian police’s efforts to catch drunk drivers, an ad campaign is attempting to keep drunk drivers off the roads in the first place.

The ad campaign by the Road Safety Advisory Council in Tasmania, titled ‘Nobody cheers for drink drivers’, attempts to highlight that drink driving is a failure. The campaign puts the focus firmly on younger men and encourages friends to speak up to get their mates to do the right thing.

“Driving after drinking alcohol is a failure,” says the ad. “A failure to recognise the driver is putting his or her life in danger and that of other road users. Alcohol is a factor in 20 percent of serious casualty (fatalities and serious injury) crashes. About 75 percent of them are men.”

The focus on younger men, specifically those in the 17 to 25 year-old aged group, is based on statistics that show while this age group makes up six percent of the Tasmanian population, they are involved in 17 percent of serious road crash casualties. Even more concerning, alcohol is a factor in 26 percent of these casualties.

An article in The Mercury quotes Road Safety Advisory Council chairman Jim Cox, who says the ad campaign is designed to get the attention of this 17 to 25 year-old male age group.

“We want to get these blokes’ attention,” Mr Cox said. “They like to have fun, including fooling around, what some people might call dumb stuff, so we’ve included it in the campaign.

“But driving after drinking is the ultimate dumb stuff and a real mate stops his mates from doing it.”

The focus on mates is thanks to the long-running Real Mates campaign, which aims to lower the number of serious casualty crashes in Tasmania involving 17 to 25 year-old men.

“We know drinking and driving — even being just a little bit over the limit — greatly increases the chances of killing or injuring yourself or somebody else,” Mr Cox said in The Mercury article.

“That’s why we’re asking people to be a real mate and not let their mate do the ultimate dumb thing of driving after drinking.” 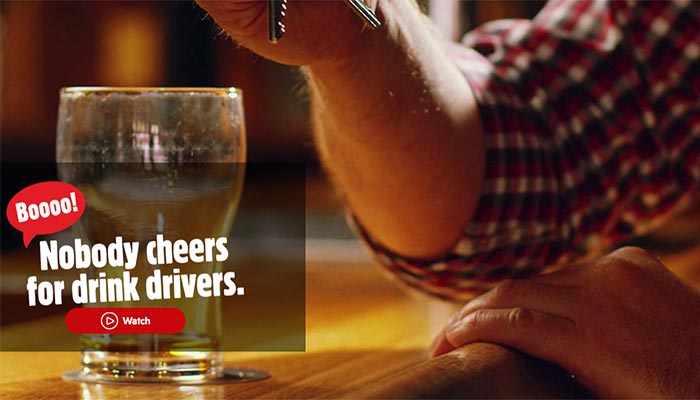