In what’s good news for most road users in Victoria, the State Government has committed $15 million to build 10 new “state-of-the-art” drug and booze buses, to boost the police’s drug and alcohol testing capabilities on Victorian roads.

You may think the announcement of the new booze and drug buses would be good news for everyone in Victoria, as it will allow police to increase drug and alcohol testing and help to make the roads safer. However, for those who continue to take the risk and drive over the limit or take drugs and drive, the announcement may be bad news. And we know that there are many such people out there.

In making the drug and booze bus announcement, Minister for Police Lisa Neville said, “Following one of the worst years on our roads, the new fleet of drug and booze buses will expand the reach of Victoria Police so they can target more locations, more often.”

The drug and booze bus announcement preceded new Victorian Transport Accident Commission advertising that puts drug drivers on notice. It features a grandson who refuses wine at a family barbecue because he needs to drive his grandmother home. But after being pulled over by police for random drug and alcohol testing, the grandson records a positive result for illicit drugs.

The slogan for the advertising is ‘More drug tests. More places. More often’. It highlights that drug driving is a serious issue. In the last five years around 41% of all drivers and motorcyclists killed who were tested, had drugs in their system. This includes the drugs cannabis (18% of those killed) and stimulant drugs such as ecstasy, speed and ICE (11%), but also licit drugs that can affect a person’s ability to operate machinery, such as anti-depressants.

The advertising also warns that Victoria Police have the right to pull drivers over at any time to test for drugs. 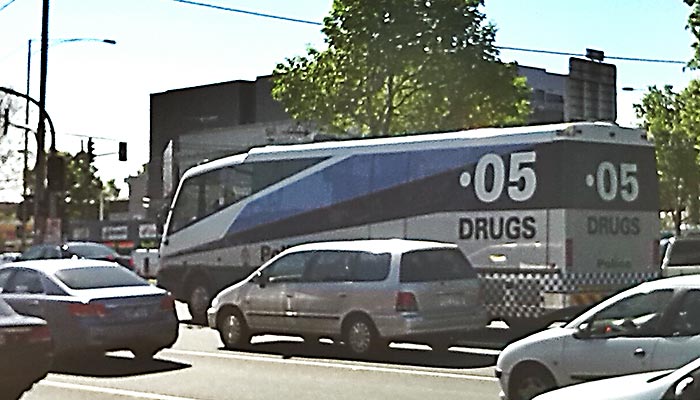